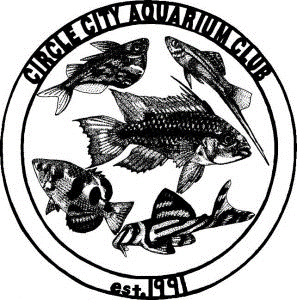 CIRCLE CITY AQUARIUM CLUB, INC. was founded in February 1991. There were a total of six people who had many meetings for two months about forming a new club for tropical fish. Our very first meeting was held in the IU building on 38th St across from the fair grounds. That building has been replaced by a barn now. The first meeting was attended by about fifty aquarists. Of the fifty present, 35 joined the club including 3 pet shop owners and two fish wholesale owners. Becky Mumford suggested the name for the club as the Circle City Aquarium Club. We did not want to be called a society. Our very first Auction included over 2000 items and the auction went from 11 am to way past 11 pm that day. That is when we started meeting at the National Guard Armory because we needed a much bigger room to meet in. As time went on our membership increased immensely. We had a membership of over 200 of which approximately 60 attended the meetings. After about 2 years meeting at the Armory, a member who worked at Garfield Park, suggested we think about moving the club to Garfield Park Conservatory, Instead of paying cash for our meeting room we would clean the ponds. Shortly after a contract was signed, the club moved and has been there since. Currently we average about 120 members of which 35-45 attend meetings.  In 2011 our growing membership and needs for a better venue for our auctions and meetings prompted us to move our meetings to the Stonegate Early College High School.  After the closure of the school at the end of 2011, the club moved around to several temporary locations and settled at the Clarion Waterfront Hotel in late 2012.

Our membership consists of a wide variety of aquarists with a range of interests from cichlids to killies to livebearers and more.  We have active Breeders Awards and Horticulturalist Awards programs and boast a club magazine that has been entirely member authored for several years now.  Each year we put on two all species auctions and a swap meet.

If you are an aquarist and are looking for a few friendly faces and some conversation about fish and plants, we would love for you to come and join us.